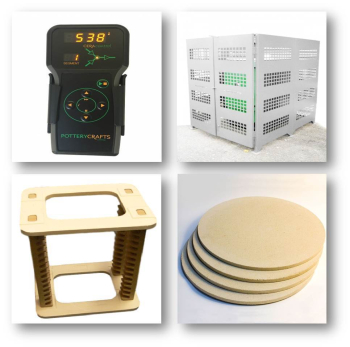 The effect of temperature and time together is called heatwork. Pure temperature only tells half of the story, to understand the firing process it is essential to grasp that the time taken to carry out a firing has nearly as much bearing on the end result, as the temperature. For example, if two identical pieces are fired, one taking eight hours to reach temperature, the other only six hours, the results will be verydifferent. Even though the same temperature has been achieved the shorter firing has not cooked the piece enough, i.e. it has not had enough heatwork.

Heatwork can be measured with Pyrometric cones. These are small pieces ofclay resembling tall pyramids, see right, that are made from precisely formulated materials. Cones soften and bend when the exact amount of heatwork has been achieved; there are many different values covering a large temperaturerange. A cone has been fired correctly when the tip just touches the ground. Cones have a temperature values that assume a constant heating ramp, e.g. 150°C per hour. For example the cone 06 has a value of 1011°C if fired at 150°C; however if it is fired at a ramp of only 60°C the top temperature needs only to be 995°C to achieve the same results.The slower rate of heating has cooked the work more.

Only the temperatures during the last hundred degrees affect the cone; during this period the kiln will be slowing down whatever the ramp rate set on the controller.Kilns cannot maintain high rates of temperature increase because heat loss from the kin increases as the temperaturerises;a heating ramp of 200°C per hour from 600°C will for example soon begin to slow down and at 1200°C may be in the region 100°C per hour and at 1280°C it will be more likely to be something like 10 to 15°C per hour. To correlate controller to cone accurately you must monitor the actual speed achieved for the last 100 degrees.

It isuseful,if not essential, to use cones when first establishing new programs in your controller, as a cone will give you a measure of the heatwork actually achieved in the kiln. Once you have established a program that puts the appropriate cone down then the controller will replicate it for each firing. For more information go to www.ortonceramic.com. Below are some useful downloads for you.

Click Here to view the Cones and Firing Booklet.

Click Here to view an in depth look at the Orton Cone Chart.